Commissioners Marian Moskowitz, Josh Maxwell and Michelle Kichline officially dedicated the garden at the County’s Springton Manor Farm as the Senator Andrew Dinniman Garden.  Senator Dinniman retired from public office at the end of 2020 after nearly 30 years as an elected official, serving as a Chester County Commissioner and then as State Senator.

Speaking on behalf of the Board of Commissioners, Chair Marian Moskowitz said, “When Senator Dinniman announced his plans to retire, we began to think of a way that we could honor his many years of public service, and especially his efforts to address hunger in Chester County.

“The successful Gleaning Program that Andy developed 25 years ago, with a network of volunteers, quickly established a resource for locally grown fruit and vegetables that was distributed to county agencies.  The fruits of his labors, along with those of local farmers, community groups, and individuals, quite literally continue to this day through gardens like those at Springton Manor Farm, managed by the Chester County Food Bank.”

The Chester County Gleaning Program began in 1996, when then County Commissioner Dinniman called a meeting of concerned citizens to address the hunger issue in Chester County.  At that meeting, it was suggested that farm surplus, an untapped source of fresh, nourishing food, was a viable solution to the hunger problem.

“I believe that the problem of hunger, in a place like Chester County, is solvable, and the Gleaning Program was designed to be part of that solution,” said Senator Dinniman.  “I am deeply honored by the Commissioners, naming the Garden in recognition of my public service.”

The first two years of the Chester County Gleaning Program – 1996 and 1997 – yielded around 24 tons of fresh fruit and vegetables, and soon after, a formal structure of the program was established.  By the year 2000, more than 500 volunteers gleaned and delivered more than 32 tons of fresh produce.

“At the end of each Gleaning event, I said that when we are blessed with an abundant harvest, it is our obligation to share the harvest with all,” added Dinniman. 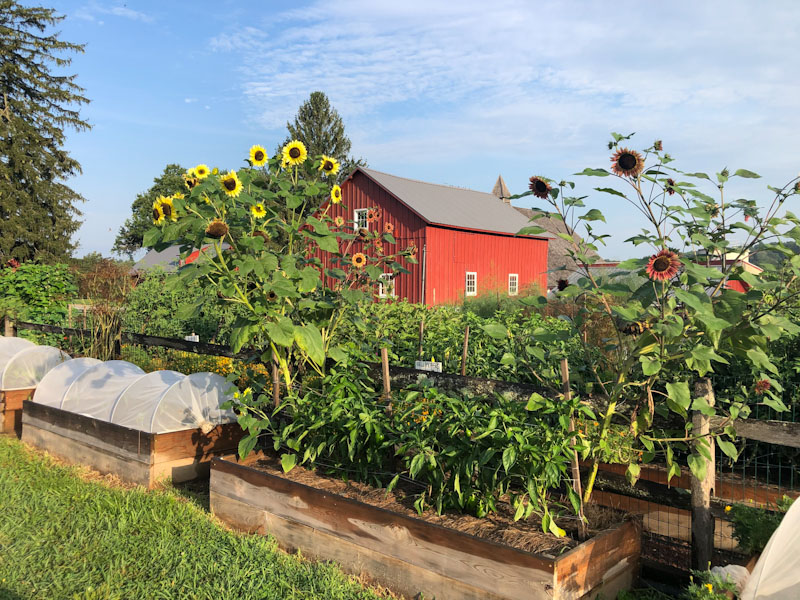 Chester County Commissioner Josh Maxwell said, “Andy Dinniman was on my School Board when I was a Downingtown student, was my professor at West Chester University, was my Senator when I was Downingtown’s mayor and he’s someone who has inspired me to always stay true to who I am and what I believe. Chester County residents have long reaped the benefits of his vigorous approach to public policy that includes multiple points of view and leaves no one behind. There are a lot of people who run for office to fit in, to me Andy stood out. He’s been my mentor since I met him. I’ll spend the rest of my career trying to turn that A- he gave me into an A+.”

Through its partnership with Chester County government, the Chester County Food Bank is able to grow fresh produce at Springton Manor Farm on one acre of fenced-in field space, in an 80-foot tunnel, and produce a variety of crops in the 32-raised bed Demonstration Garden. Seedlings are also started in Springton Manor Farm’s greenhouse.  The field and gardens are fully maintained by the Food Bank for many visitors to enjoy, with the mission to educate and inspire.

“The concept of Senator Dinniman’s Gleaning Program was very simple, yet effective,” said Commissioner Michelle Kichline. “It is why the Chester County Food Bank continued the model when it was established in 2009, and why it has grown to include some year-round operations like the one at Springton Manor.” 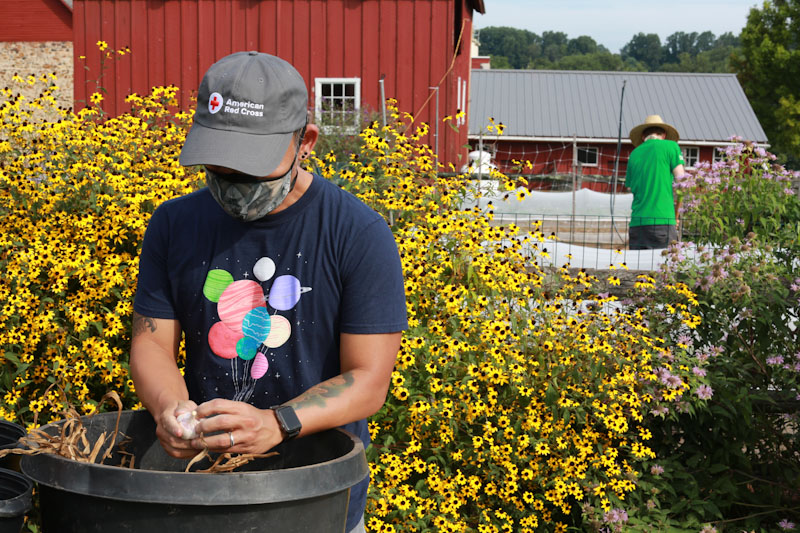 At the event honoring Senator Dinniman, the Commissioners unveiled a sign that reads:

Though we’ve been around since 2009, here at the Chester County Food Bank, we notice that there is still sometimes confusion — even among some of our most dedicated supporters — about exactly what we do and how we differ from food pantries and cupboards. We thought it might be helpful to explain here and define some terminology to help clarify!

Some of the issues come from blurry definitions of the terms “food bank” and “food pantry.” When you think of the archetypal, cultural idea of a food bank, perhaps featured on a holiday episode of a television show, it may be of a family picking up a box of food from a church or community center. In fact, that scenario is really taking place at a food pantry (or cupboard), where individuals can go during set hours to obtain food. Usually, these locations are staffed by volunteers, and their mission is to get food into the hands of those who are in need. 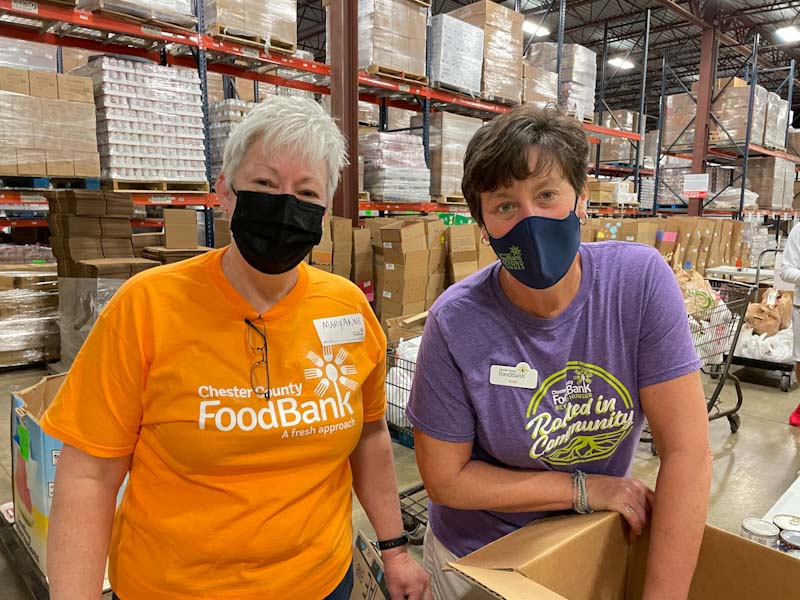 Chester County Food Bank, as our name implies, is a food bank, the hub which provides nutritious items to food cupboards. We are a centralized hunger-relief organization, taking in food from donations, from what we grow, and purchased using monetary donations and grant monies. Staff and volunteers then work to organize, process, and cook food for our partner agencies and programs. Food and meals are then distributed through our programs and to our hunger relief partners (like food cupboards) who provide food to people in need. 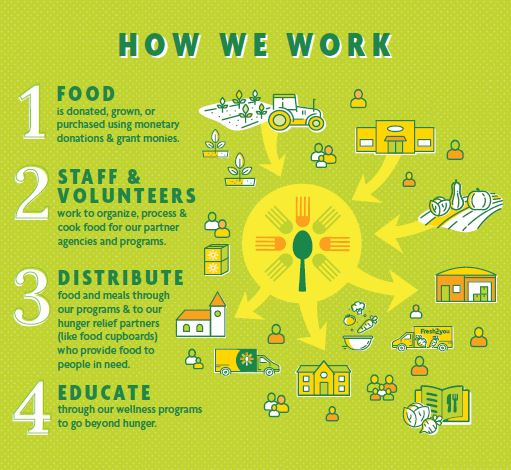 Part of our role as a food bank (versus a cupboard) is that we take a strategic, holistic approach to combating food insecurity. Yes, distributing food to local cupboards is part of this, but we go beyond hunger, with advocacy and educational initiatives through our wellness programs, supplemental feeding programs for school-aged children and seniors, emergency response food boxes, and our Farm and Garden Programs. 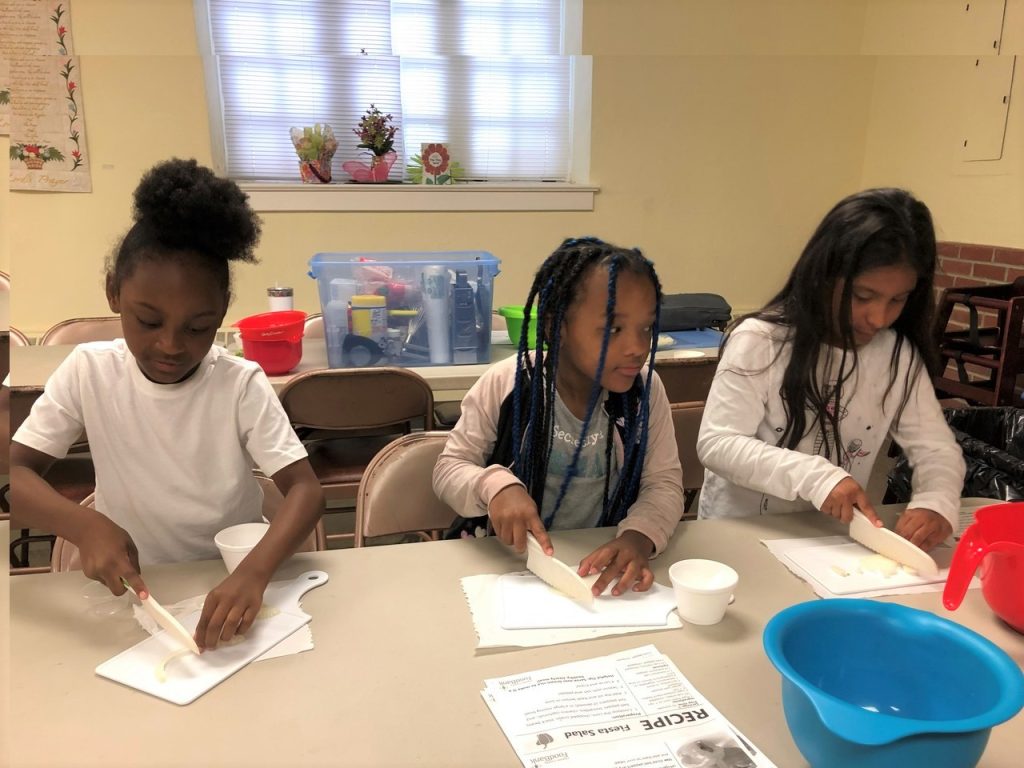 While we don’t provide boxes of food directly to individuals, we still encourage anyone who needs food to contact us, as we are more than happy to connect you with the many resources within our county that can help.

While we are affiliated with a number of community partners, we are an independent 501(c)3 organization. So if you’re considering donating and you want your dollars to stay in Chester County, please note that we are the only food bank in the county. While we are one of the wealthiest counties in Pennsylvania, one out of four households in our community struggle to put food on the table and are without reliable access to a sufficient quantity of affordable and nutritious food at any given time.

We hope this has been a helpful explanation of how we — a food bank — are different from a food pantry. We think of it like this: Chester County Food Bank is the hub in the center of a wheel, and all of the spokes reach out to our community agency network that can connect one-on-one with the neighbors in need in Chester County.

Want to learn more? You can also donate food, funds, and time to help us achieve our mission or call (610) 873-6000 to speak to someone about getting involved Thanks to you, we’re growing a healthier community.

Editor’s Note: This post was originally published in June 2018 and has been updated for accuracy and comprehensiveness.