According to sobering statistics provided by the city, the current population of Coatesville living in poverty is 35.3%. Of those, 8.3% are senior citizens over age 65. Out of 6,311 students within the Coatesville Area School District, over 50% are eligible to take advantage of free or reduced lunch programs. That’s close to 5,000 residents who are in need of food cupboards and agencies in the Coatesville area alone. In 2015, the Chester County Food Bank took the initiative to create a task force to address the critical issues surrounding the city’s food insecurities and ways to streamline food distribution.

The objective of the Food Summit is to assemble the city’s agencies and organizations who serve meals, distribute food, host nutrition education programs or grow food for the Coatesville community to discuss and determine solutions for improving food insecurity logistics, in addition to getting to know the faces behind the resources. 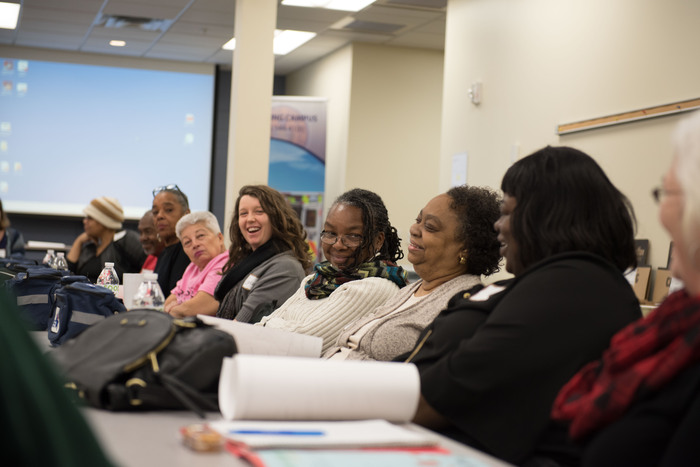 “Having participated in the Coatesville Food Summit since its inception, I find it to be a valuable resource for my organization in helping us to meet the complex needs of our clients,” noted Kathryn Spurlock, director of the Coatesville Center for Community Health. “I have met other food providers and learned to appreciate their strengths, as well as understand the challenges they face in supplying food to their constituents. Learning more about the Food Bank, as well as its operations and services available, has also enabled me to work more closely with them to provide greater access to food and education to the clients of our Center.”

Explaining further how the Summit specifically helps her organization, Kathryn continued, “Providing food resources has added value to the holistic approach we take at our Center in providing care and support for many aspects of personal and family life. Helping our clients to improve their health and nutrition improves their ability to cope with the personal challenges they are facing. Through the Coatesville Food Summit, we have improved our ability to approach providing food and resources as a community, and not just as one organization. This has helped us to have a greater understanding of the overall needs of Coatesville, and work to establish a more seamless approach to food delivery with less duplication. As a result, a more effective and efficient system helps Coatesville to thrive as a community.”

Phoebe Kitson-Davis, Director of Agency and Community Partnerships for the Chester County Food Bank, explained how the Summit has evolved. “The first year, our goal was to get everyone in a room together to meet one another, to garner support with local politicians and services and make valuable connections while promoting constructive dialogue. Our second year concentrated more on bringing the partners together, operating hours of the organizations, educating each other on how we all serve the community while determining where specific gaps or overlaps in food distribution take place.” 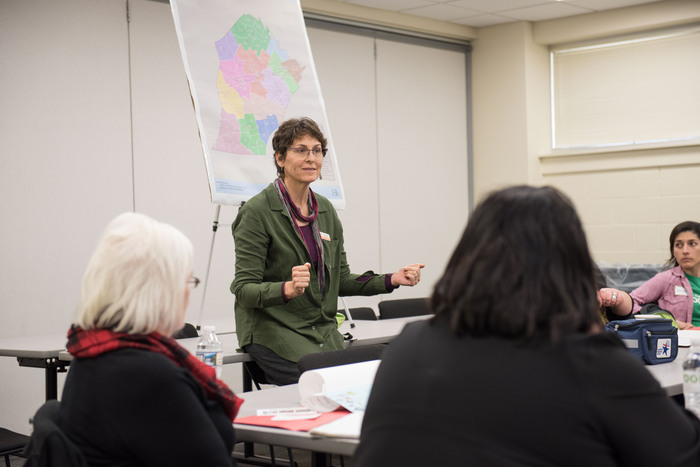 The agenda of this year’s well-attended Summit consisted of an introduction of participants; specific programs, capabilities and goals of the Food Bank; discussions of an in-depth food assessment study being conducted by Drexel University and West Chester University regarding food insecurity from 2015–2016 in the Coatesville area, summer student feeding programs with the Coatesville Area School District and decisions regarding a single stream holiday food distribution.

As a result, the Food Bank will be forming a community-based committee that will assist with a food box distribution event on Saturday, November 18. “It will be a first for Coatesville to have one Thanksgiving distribution. We plan on modeling our distribution plan on the existing efficiently run by the Coatesville Youth Initiatives backpack program,” said Phoebe. “Invaluable community volunteers and business sponsorships are crucial, and a centrally located site is needed to make this a success for everyone. I anticipate close to 1,000 Thanksgiving food boxes to be allocated via our network of partners. That’s close to one-third of the total handled for the entire holiday season by the Food Bank.”

“I grew up in the city. I couldn’t grow a tomato if I tried,” laughs Elmer Duckinfield, when asked what inspired him to become Chester County’s first official farm gleaning volunteer back in 1996. Elmer’s humility, dedication and quick humor become evident as we explored the origin of one of our most successful campaigns to get fresh produce into the hands of those experiencing food insecurity in our area.

Though Elmer, an octogenarian, has considered himself officially retired from the volunteer circuit for the past four years, back in 1996 an idea was brewing and Elmer was quick to embrace it and become a welcome fixture in our community.

In the 90’s, food cupboards were lightly scattered within some of the larger towns of the county, but most of the hard work involved in food donations was done by church volunteer groups, scout food drives and the annual holiday collection.

At the time, Andrew Dinniman, a county commissioner and now a state senator, saw a need to do more. He knew exactly whom he could request to get the job done. “Who says no to Andy?” says Elmer, who had recently retired from Burroughs Corp. when he was tapped to lead the new effort.

Elmer and Senator Dinniman have known each other for many years. Elmer continues, “He has a way of supporting people, and putting a level of confidence in you that makes you want to succeed. We believed that if we approached some of our county’s local farmers, we could find a way to gather the excess large volume crop yield that sometimes went uncollected. Produce like potatoes, peppers, onions and corn were prime targets.” 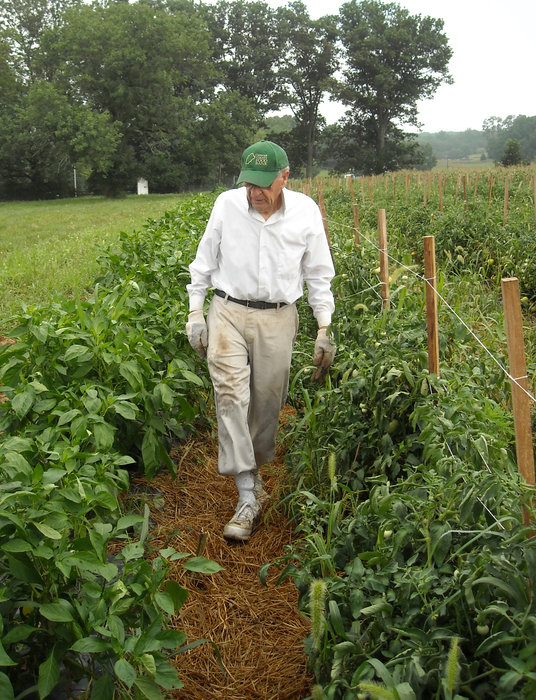 Thus, the Chester County “gleaning program” idea was born and eventually blossomed into one of the largest fresh produce generators for the county. Today, we see the Food Bank distributing about 200,000 pounds annually to community partners who in turn reach over 40,000 men, women and children in Chester County.

Pete’s Produce in Westtown was one of the first farms that Elmer “staffed” with volunteers. Owner Pete Flynn agreed to set aside several acres for the Gleaning Program that still exists today. “I remember quite a few times leaving the farm at the end of the day and Elmer would still be in the fields with stacks of produce to deliver to the Food Bank,” says Pete. “Even if he was a few volunteers short, he worked hard to get the job done and never once complained.”

Soliciting volunteers was something that Elmer had little experience with early on. He worked with the Grove Methodist Church initially to come up with lists of names. “There were no computers or cell phones back then. I did everything with pen, paper and my ear to the phone,” says Elmer. “I had to make schedules and have people ready to go when the crops were ready. There was no time to wait. I was so very fortunate with the many volunteers that have helped with gleaning over the years. They are the ones that make it all possible and worthwhile.”

Longtime volunteers Ed and Mary Fitzpatrick say, “We originally volunteered to assist Elmer with bread and pastries donations from Entenmann’s Bakery, which we boxed and loaded into cars or vans from the various agencies. One day, we discovered that Elmer was heading out to one of the produce farms in the area for some ‘real work’ and we were hooked. It was not unusual to arrive at the site to find he had already started the more difficult tasks himself. When he recruited us to come out at a certain hour, we knew to arrive much earlier because he would have started alone.” 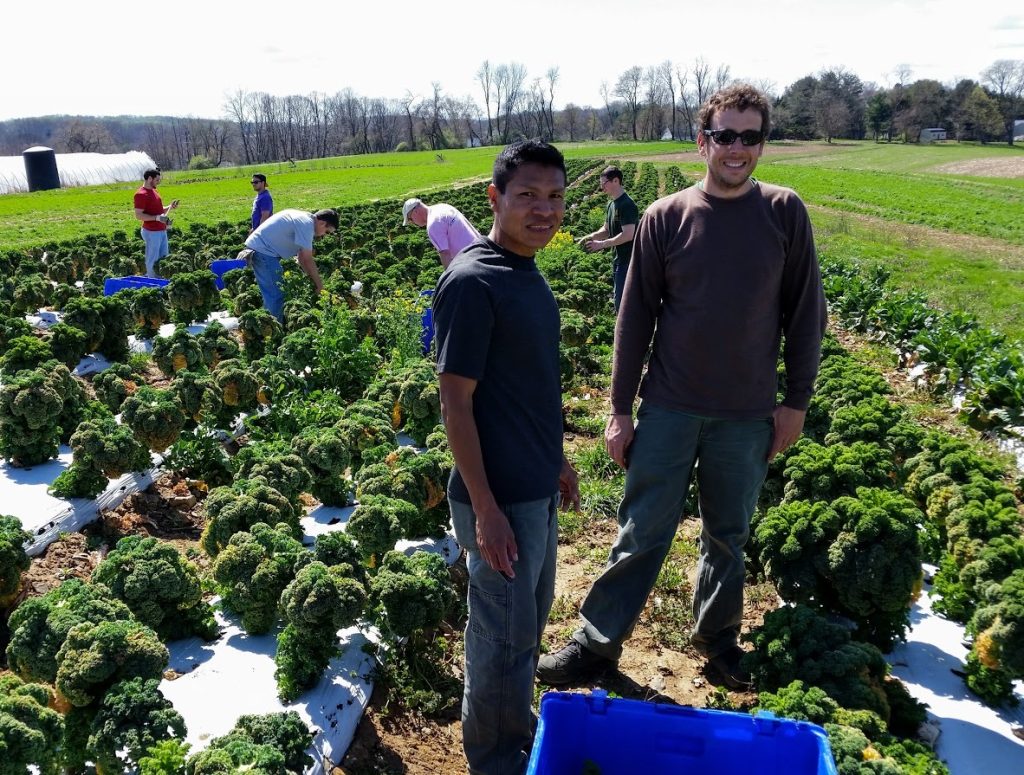 Today, the Chester County Food Bank still requires volunteers to work alongside their staff farmers, Bill Shick and Edil Cunampio. Lots of people, like you, who only need devote a few hours or more to making a difference whether it’s planting or harvesting from one of our now many partnered farms or working in our Eagleview location in the kitchen. As our honorary volunteer chairperson Elmer so simply and wholeheartedly illustrates, thinking outside of ourselves creates an opportunity to improve the quality of lives for others. Elmer and his diverse team are also proof that volunteers of all ages and interests are needed and welcomed. Love to garden? Great! Prefer to help elsewhere along the food chain? That works, too.

Those who speak of Elmer refer to his humility. Never one to take credit for being the first to arrive in the field or the last to leave, Elmer also trained all the volunteers and helped deliver fresh produce from the back of a station wagon.

Elmer has bounced back from hip, cataract and heart surgery. His story continues to serve as a reminder to all of us of how dedication, creativity and hard work generate positive results for our community. Thank you, Elmer. We appreciate you.

Editor’s Note: Elmer lost his brave and quiet battle with cancer on May 6, 2017, surrounded by his beloved family. We vow to carry on his legacy.