There are plenty of social media trends that come into our feeds but don’t strike much interest. But one emerging trend that we can get behind is people asking for donations to charitable causes via social media in lieu of birthday (anniversary, housewarming) presents. It’s such a creative, personal way for people to engage with their communities, both near and far, and to fundraise for an issue or organization that’s meaningful to them.

In the past year or two, we’ve noticed lots of our amazing supporters using Facebook and other platforms to gather birthday/celebration donations for Chester County Food Bank (CCFB), and for that we cannot thank you enough! It warms our hearts to see the selflessness and generosity that are behind these online fundraisers. 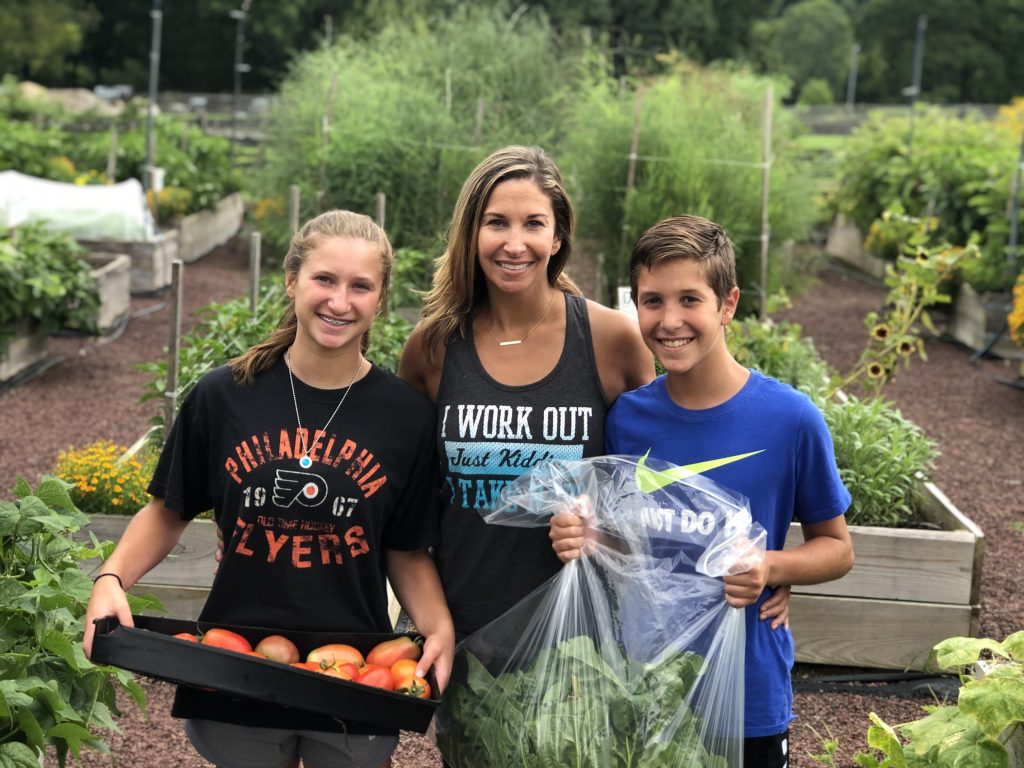 Jason Bauer with his mom and sister. Photo courtesy of Lori Bauer.

Many adults have given up expecting a huge party and heaps of presents for their birthdays, but it’s something extra-special when kids use their birthdays as a way to encourage friends and family to donate time or money to good causes. We have two stories of kids who recently turned their birthdays into occasions to give back to their communities through the CCFB.

In August 2019, the only thing Jason Bauer wanted for his 12th birthday was to volunteer with his mother and sister at one of our raised bed gardens in Springton. Twelve is the minimum age for volunteers at the CCFB, and Jason wanted to do it at the first possible opportunity. He got his wish, and he and his family spent a beautiful afternoon helping to harvest produce to feed our neighbors in need.

“It was something he had been really excited about for a while,” said Jason’s mom, Lori Bauer. “Jason, his sister, and I all loved it and found it very rewarding and humbling. The people who worked and volunteered there were all so kind and welcoming and helped make it a very wonderful experience!”

Lori says that Jason’s interest in the Chester County Food Bank started last year when one of his teachers spoke to the class about saving the planet. This school lesson inspired him to start fundraising for CCFB.

“He did this through selling handmade toys and lemonade, as well as fundraising (with my help) via email and social media,” said Lori. “I’ve never seen his face light up more than when he saw the donation amount increase!”

So far, Jason’s efforts, including a Go Fund Me Campaign, have raised nearly $400 that he plans to donate to the Chester County Food Bank. In his Go Fund Me statement, Jason says that he’s done some research and “found out that if we donate money instead of canned foods, our money not only can buy more food, it can also buy healthier options, like fruits and vegetables.” This is true! Of course, food drives are hugely important to what CCFB does, but with donated funds, we’re able to use our buying power to procure huge quantities of fresh produce from produce auctions, which helps us to fulfill our commitment to nutrition. 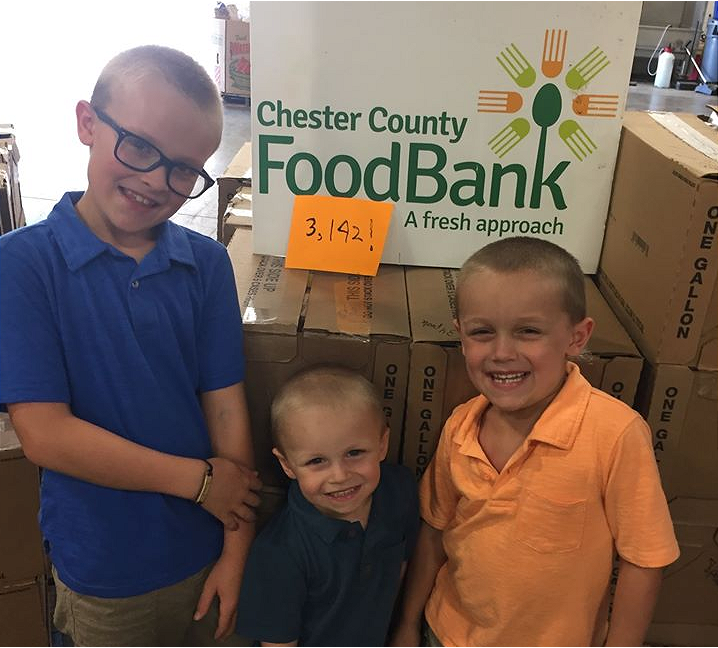 Another inspiring story came to us last July when another local child, Dylan Houck, used his birthday as the organizing force behind a food drive — and the community really stepped up to get involved and support his efforts. Dylan’s goal was to raise more than 3,000 pounds of food, which he handily achieved: 3,124 pounds of food ended up going to the CCFB and an additional 160 pounds of food to a local family. This incredible haul consisted of 452 cans of chicken and tuna, 700 boxes of mac and cheese, 221 jars of peanut butter, 155 boxes of cereal and literally tons more! It’s truly inspiring to see what is possible when a group of people band together to make a difference in their town or region!

If these kids can go without new books, toys and clothes for one birthday, anyone can! Consider using your next birthday, anniversary or other celebration as a way to mobilize your social circles into some positive action. (We’ve created a fun Facebook birthday fundraiser cover to get you started. )

Whether you’re a regular visitor to our website or this is your first time here, we want to take a moment to say thank you: for caring about your community, prioritizing food insecurity and giving back to your neighbors in need. We know there are many demands on your time and your dollar — as always, we urge you to keep your giving local whenever possible — and we appreciate your consideration of Chester County Food Bank as a place to donate your resources.

If you are a newer supporter or just need a quick refresher, here’s a little bit of background about CCFB:

For nearly a decade, we’ve been a force for positive change in Chester County, addressing the needs of a population that isn’t always visible in one of the wealthiest counties in Pennsylvania. We don’t simply distribute food — we search for ways to make a lasting impact on our community, disrupt the cycles of economic instability, create sustainable systems and empower individuals and families.

Some of the ways we do this are through educational initiatives, such as: 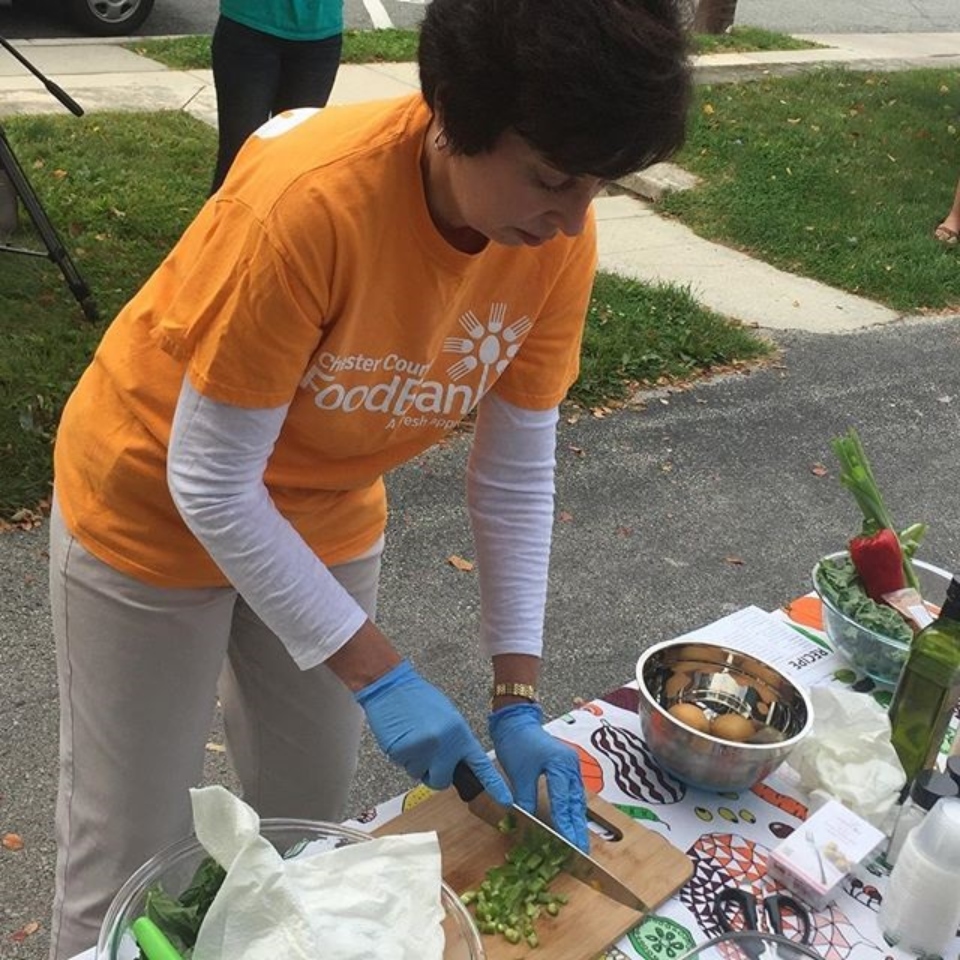 We certainly do collect a lot of food (which makes its way to dozens of community organizations and food pantries in Chester County), both from individual donors and groups, as well as through our own methods of growing fresh produce. Here are a few examples: 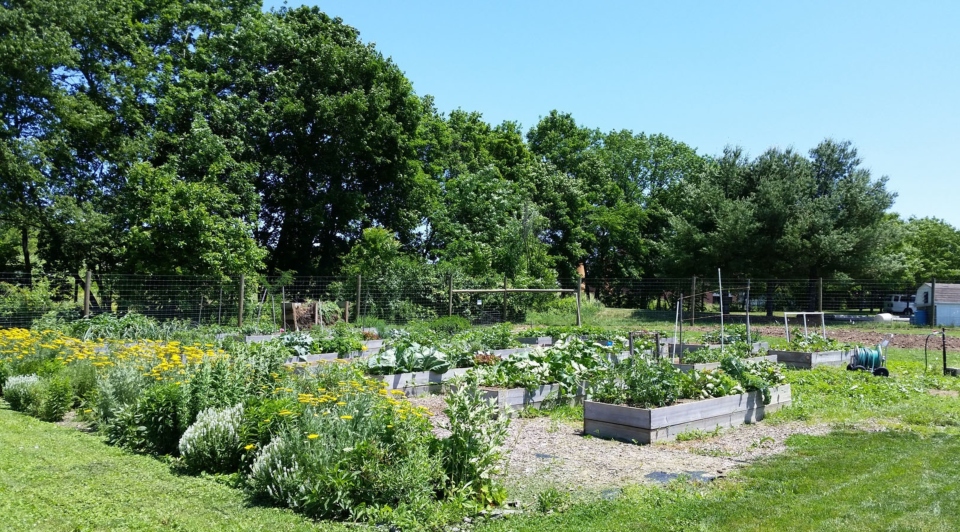 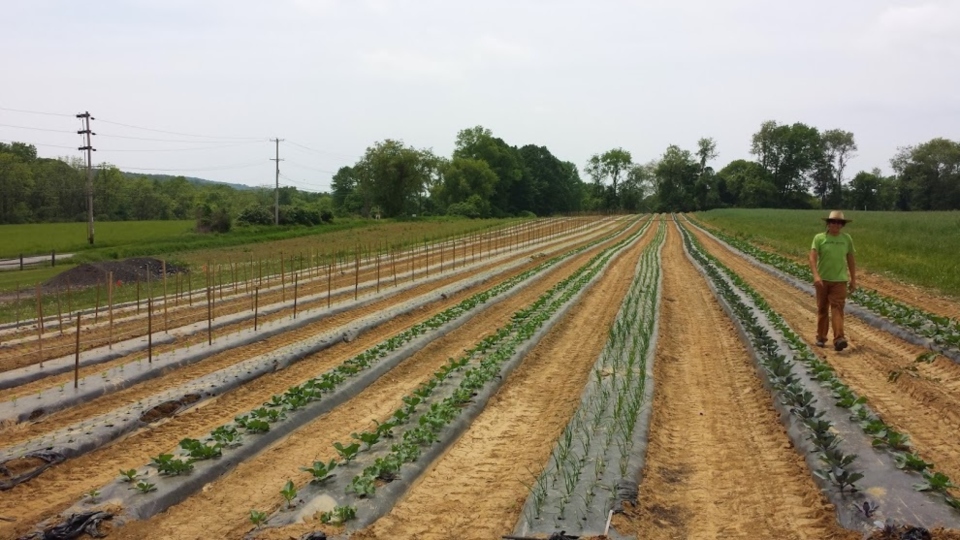 This is just a small taste of all of things Chester County Food Bank is able to do thanks to people like you! But just because the winter holidays have wrapped up doesn’t mean we’re all set for the year. We rely on donors and volunteers year-round to achieve our mission of mobilizing our community to ensure access to real, healthy food. Will you join us in 2019 to help create a healthier Chester County?

Want to learn more? Sign up for our newsletter and stay connected. You can also donate food, funds and time to help us achieve our mission. Call (610) 873-6000 to speak to someone about getting involved or requesting a tour. Thanks to you, we’re growing a healthier community.

Though we’ve been around for nearly a decade, here at the Chester County Food Bank, we notice that there is still sometimes confusion — even among some of our most dedicated supporters — about exactly what we do and how we differ from food pantries and cupboards. We thought it might be helpful to explain here and define some terminology to help clarify!

Some of the issues come from blurry definitions of the terms “food bank” and “food pantry.” When you think of the archetypal, cultural idea of a food bank, perhaps featured on a holiday episode of a television show, it may be of a family picking up a box of food from a church basement or community center. In fact, that scenario is really taking place at a food pantry (or cupboard), where individuals can go during set hours to obtain food. Usually, these locations are staffed by volunteers, and their mission to simply get food into the hands of those who are in need. 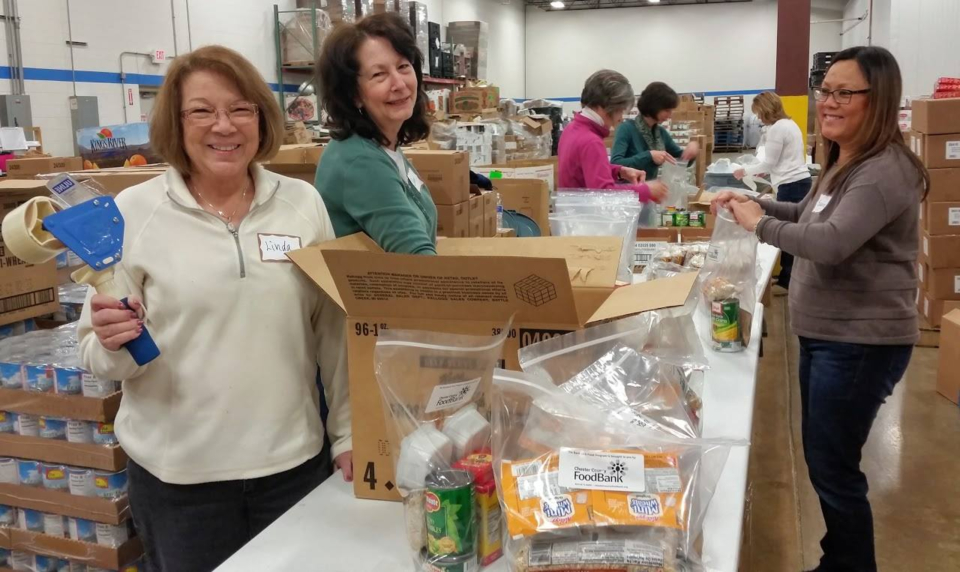 Chester County Food Bank, as our name implies, is a food bank, the hub which provides nutritious items to food cupboards. We are a centralized hunger relief organization, taking in donations from many sources, organizing and storing them in our warehouse and then redistributing items to food pantries, which we refer to as our “member agencies.” While we don’t provide boxes of food directly to individuals, we still encourage anyone who needs food to contact us, as we are more than happy to connect you with the many resources within our county that can help.

Part of our role as a food bank (versus a cupboard) is that we take a strategic, holistic approach to combating food insecurity. Yes, distributing food to local cupboards is part of this, but we go even further, with advocacy and educational initiatives like Taste It! and Eat Fresh, supplemental feeding programs for school-aged children and seniors, emergency response food boxes and our Raised Bed Garden Program, which is part of the reason that we can provide so much fresh food to local cupboards. 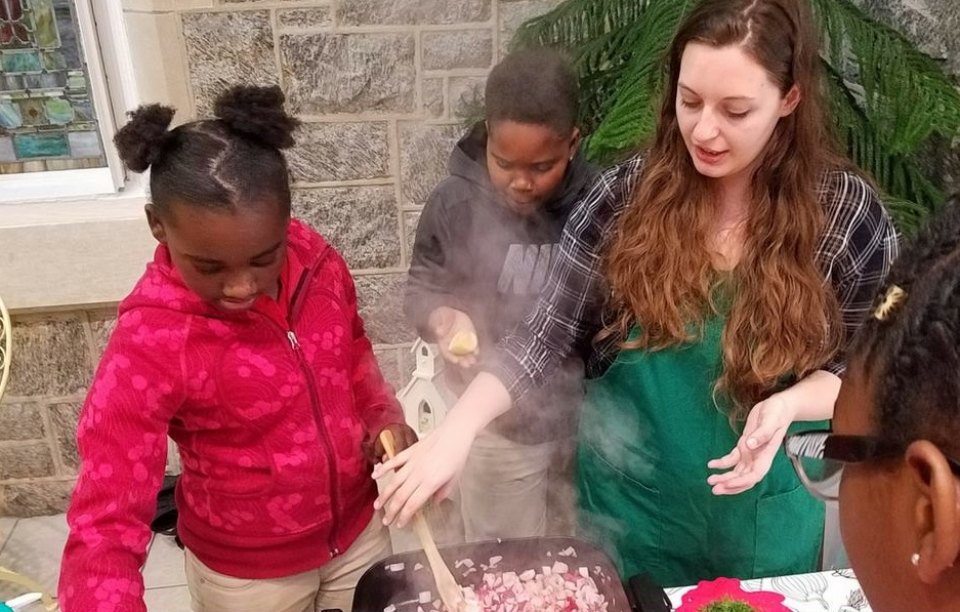 While we are affiliated with a number of community partners, we are an independent organization. So if you’re considering donating and you want your dollars to stay in Chester County, please note that we are the only food bank in the county. While we are one of the wealthiest counties in Pennsylvania, there are many, many households in our community without reliable access to a sufficient quantity of affordable and nutritious food at any given time.

We hope this has been a helpful explanation of how we — a food bank — are different from a food pantry. We think of it like this: Chester County Food Bank is the hub in the center of a wheel, and all of the spokes reach out to our member agencies that can connect one-on-one with the neighbors in need in Chester County. 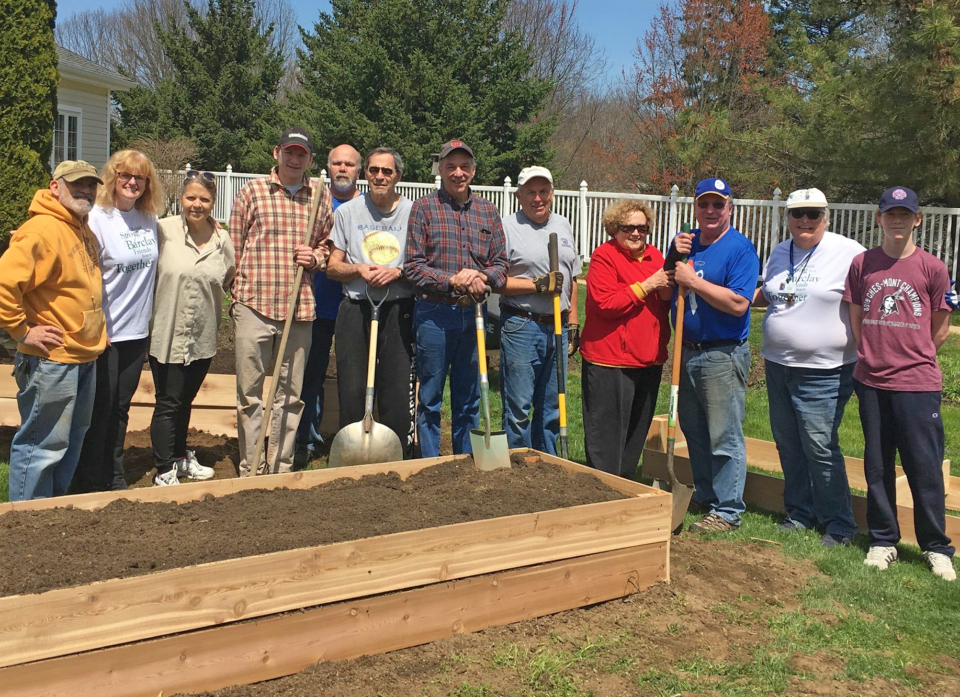 Now in its sixth year of operation, the Chester County Food Bank has always been on a dedicated mission to end hunger in Chester County, but do you know how we do it, what we promote or how the education that we provide benefits the community?

There are many life-changing layers of this onion to peel. The Food Bank does so much more than collect canned goods, sort fresh produce and raise awareness of the need to help close to 50,000 people. Take a look at the snapshot below. 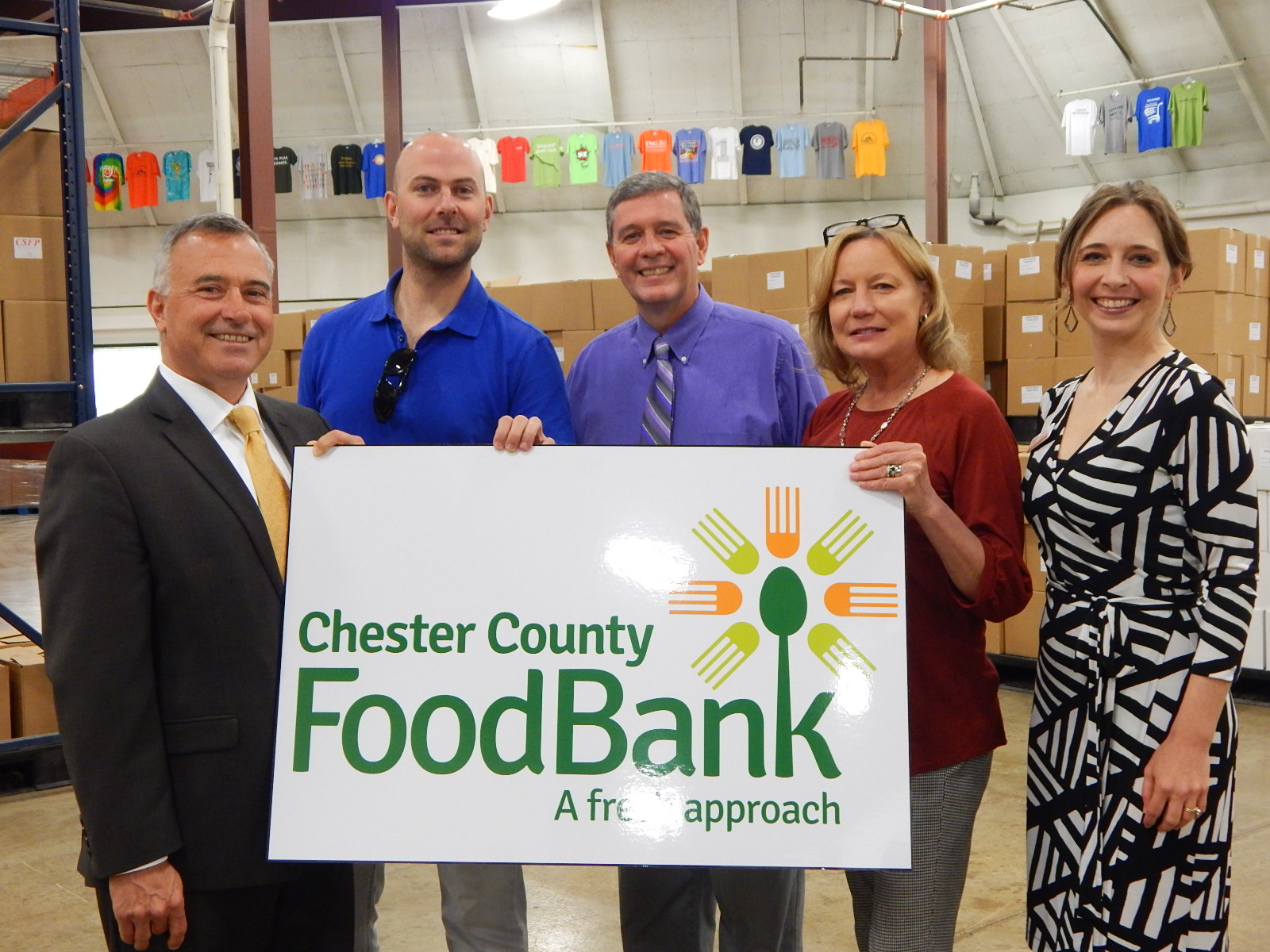 A dedicated board of directors and a tireless staff work together with enthusiastic volunteers to come up with ways to benefit local communities through: 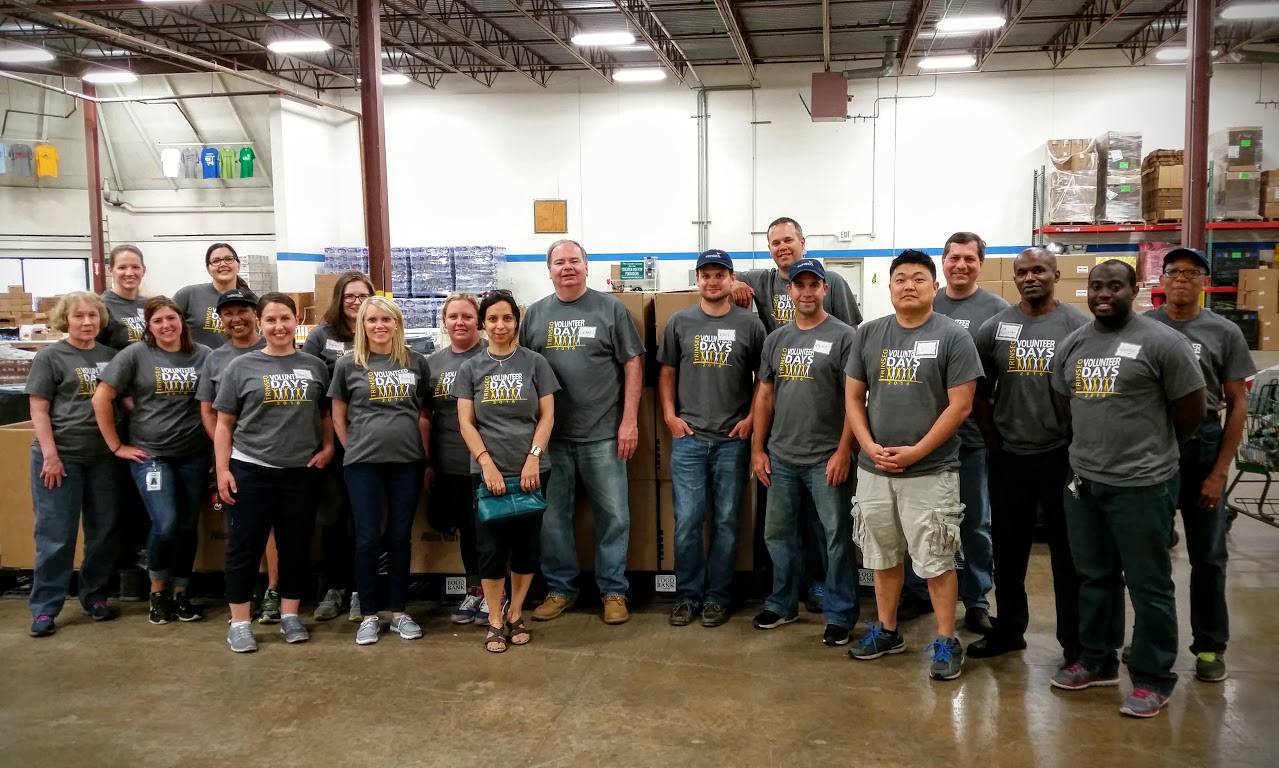 It takes a tremendous amount of people-power to bring about positive change in Chester County. Take a look at just a few examples of how the Food Bank makes an impact.

Food Drives: Schools, corporations and personal food drives are a valuable resource to acquire much-needed nonperishable items to stock the shelves of the distribution center.

Raised Bed Gardens: a network of over 100 garden sites provides fresh produce to local food cupboards from May through November.

Farming: Partnerships with local farms like Pete’s Produce Farm and Springton Manor Farm are essential in providing fresh produce to the Food Bank for distribution.

Commercial Kitchen: This first stop is where food is cleaned, sorted and packaged by a core team of hard-working volunteers.

Distribution: The Food Bank operates from its sole facility in Exton, where food arrives from local farms, corporations, individuals and government programs to be prepped for over 120 cupboards, pantries and partners that are located throughout Chester County.

Food Sourcing: The Chester County Food Bank uses its financial resources to purchase perishable and nonperishable food for those in need throughout the year.

Education: The Food Bank teaches the community about the importance of healthy eating through Nutrition Education programs, recipes, cooking classes and the Fresh2You Mobile Market.

As you can see, there are many layers of the Chester County Food Bank. Fortunately, because of neighbors like you the Food Bank can continue to make a difference in our community by providing assistance for individuals and families in need. Want to learn more? Schedule a tour or request a speaker for your next community or corporate meeting.